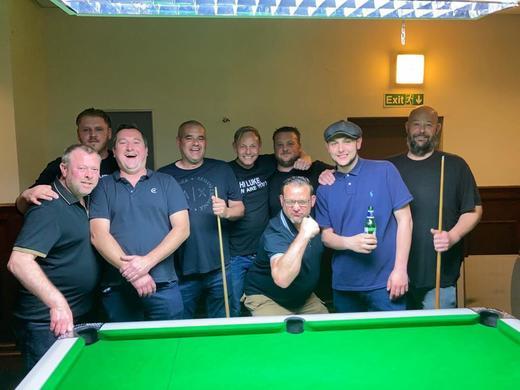 Its been quite a while since Tolworth's Interleague representatives laid their hands on Surrey's silverware. In fact way back to the 1990' and early 2000's.

So with the new team just starting out in their first full season, thoughts of winning the Surrey Interleague Cup, were perhaps just thoughts. However captain Leigh John Barnard had assembled a strong line up for this, with the likes of Michael Marcham, Scott Mallows, Jake Worsfold, 2016 Tolworth Singles Champion Kev Carslake and the 2010 winner Luke Garman with Chris Bull, Ashley Acton, Dean Edgeler completing the team.

This years Surrey Cup had ten interleague teams from across the County. These were split into two groups of 5 with the winners of each group meeting each other in the final. Tolworth on paper had what looked a slightly easier group and they took full advantage winning emphatically 10-5, 10-0, and 10-1 in their opening three matches. The biggest hurdle would be taking on Croydon B in the last group game, however this turned out to be a dead rubber as an experienced Croydon team had only won 2 of their first 3 games and Tolworth's frame difference meant they had topped the group. The game ended 9-9 with Michael Marcham just being edged out in a one frame play off.

In the final they would meet a very experienced Godalming team with the likes of Nev Glover, Andy Sutherland and Paul Brooks playing. However Tolworth's brand of attacking pool carved an early 4-1 lead which despite a mid match rally from Godalming they never looked like relinquishing. It was left to Ashley Acton to hold his nerve for a 10-8 score line. The convincing manner in which Tolworth played as a team wasn't really reflected in the final score.

So Tolworth are once again Champions of Surrey, well done to all. A special mention to Luke Garman unbeaten on 8/8, Dean Edgeler 7/8, Ashley Acton, Michael Marcham 6/7, Chris Bull 6/8 and Kev Carslake 5/8, with Leigh John, Scott, and Jake chipping in with important frame wins when needed.

Congratulations to the team and roll on the National Finals in October 2022.