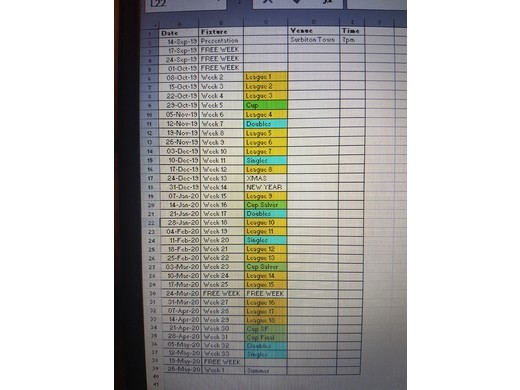 Teams can play with a minimum of three players only in exceptional circumstances from this Winter 2021, If you cannot field a team of four players. You are expected to play with four players as a standard, however if you do not have a full team at short notice and within the 72 hours minimum notice period for the match in question, you can request to play with three players.

You can only have a maximum of fifteen players registered for your team. Your player list is available to check on the website. Take a minute to check who you have signed on. If you play someone that is unregistered you will lose two pts per player and a further point for any frames won.

If you need to add players please let the league know ideally 72 hours in advance of your next game so that the website can be updated. However as an interim measure a text from myself  or any other of the League reps saying he is ok to play will suffice. If a new player is transferring teams the team captain of his current team must advise the league that he is no longer playing for him as per the main rules. Winter League transfers after 25th December each year will be subject to providing a rationale as to why they are required.

The League decision to allow additional players will be final. Summer League transfer cut off date will be the half way stage and will follow the required rational as per the Winter League. The League takes a dim view on teams found to be manipulating or using transfers or adding additional players to gain an unfair advantage, or not in the spirit the registration or transfer of players is intended.

LEAGUE, CUP and COMPETITION MATCH NO SHOWS and CANCELLATIONS

If a team fails to attend a match without contacting the opposition and without good reason the offending team may be withdrawn from the League.

A team can only postpone a maximum of two League games per season.

If you need to postpone a match because you do not have three players available to play, you will need to;

a) Contact the opposing team, giving them 72 hours notice of cancellation ahead of the fixture.

b) Contact the League 72 hours ahead of the fixture to be cancelled, explaining why you are cancelling.

c) Offending team to instigate and rearrange the fixture with the opposition within 14 days of the original date and confirm rescheduled date with the League within 14 days. If both teams fail to agree a revised date a 0-0 result will be awarded. No double headers are allowed.

e) Matches 17 and 18 cannot be cancelled without the Leagues agreement, unless they are rescheduled and played before the penultimate fixture of the season and no later than 6th April 2020.

f) If a team fails to adhere to the above rules, the non offending team will be awarded an 8-0 result in their favour. More than two 8-0 results against a team may result in expulsion from the League.

g) Cup matches can only be re arranged, if both teams agree and the match can be rescheduled and played on or before the following Monday from the original fixture.

h) Singles and Doubles matches cannot be rescheduled from Round 1 up to the Quarter Finals.

The Leagues decision is final and binding on all disputes.

This addendum is to be taken as enhancing and part of the main rules found in the documents section.