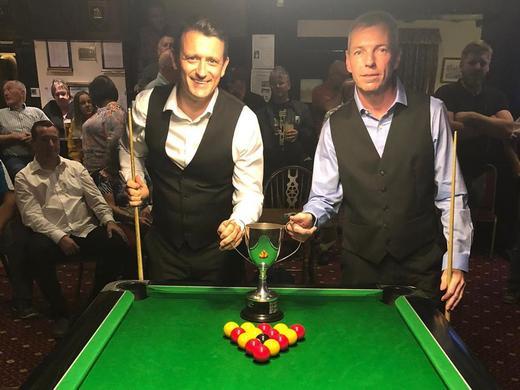 Drawn by Michael Marchim, Dave Wood and Nick O'Sullivan all Duke of Buckingham on 30th November 2021

Unfortunately Covid and isolation has two of games postponed and a new date tba. The other two games were played and both went the distance with Joe Finn coming from 2-1 down to take the spoils after Ryan Taylor missed his chance in the final frame, with Joe holding his nerve to progress after going to shake hands at 1-2 until it was pointed out it was best of 5 fames not 3. In the other Mark 'Bones' Maher came from even further behind against Mark Kram to take 3 frames on the spin to progress. Mark Kram will be ruing a couple of gilt edged chances in the last and penultimate frames, although Bones could say the same after faltering on a relatively easy chance in the first frame.. So Joe awaits the winner of Andy Sutherland and Dave Skilton and Mark Maher in a similar position, the winner of Michael Marchim and Cliff Eastwood.

Draw for Quarter and Semi Finals to be played Tuesday 4th January 2022.

Drawn by Michael Marchim, Dave Wood and Nick O'Sullivan all Duke of Buckingham on 30th November 2021.

Nos 5 v 3, 1 v 4, 2 v 6, 8 v 7 as per numbered list previously advertised on here below. No changes to dates and good luck to all. Due to length of matches Semi Finals will be arranged for a later date.

7. Michael Marchim (Duke of Buck A)

The draw for the last 16 games in the 2020 Singles is below. Drawn by Matt Giles and Ryan Taylor at Surbiton Town on Tuesday 7th January.

All players have one match to play only and matches are best of 3 frames. Matches must be played on 11th February and at stipulated venues.

Now we have reached the business end of the tournament, players are reminded that the Final is on Presentation Night with a dress code of Trousers Shirt, Waistcoat and Shoes.

Captains please make sure your home venue is available and tables in a good playing condition.

Players are to be at venues no later than 5 minutes after scheduled start times. Opponents are within their right to claim games.

If you are going to be late or not attending either contact the venue or try and contact me and I will do my best to pass it on.